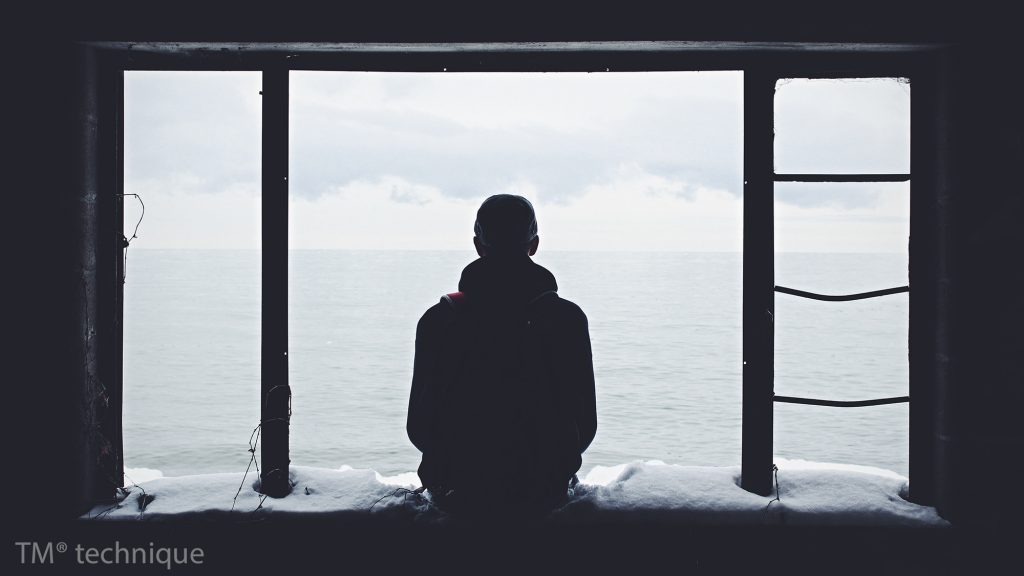 By Jeff Stoffer. Courtesy of The American Legion Magazine.

Bob Ouellette was an explosive ordnance disposal specialist in the Army as terrorism tensions escalated in the post-Desert Storm era. His duties included investigating any unattended briefcase or container that might blow up in his face, killing him or others. He spent much of his service time in the Washington, D.C., area, but also traveled the world to protect the president and other top U.S. officials. In a three-week period during the Gulf War, he never knew when any one of the 73 suspect packages he personally inspected would invite death. Such pressure, he later discovered, had a way of rewiring his brain.

“That’s an awful lot of calls, an awful lot of stress,” says Ouellette, now a civilian security specialist for the Department of Defense. “Every time you turn around, it’s like, is this one for real? I don’t like walking by trash cans. I don’t like sitting with my back to the door. I don’t like crowded situations. I exhibited all those signs of PTSD.” He was never so diagnosed, but the effect was felt.

Acting on a mantra Ouellette learned in his training as a noncommissioned officer – “know yourself and seek self-improvement” – he was issued an altogether different mantra from an ancient practice, transcendental meditation (TM), about six years ago. It was a seemingly counter-intuitive approach for a veteran whose specialty required intense, high-stress precision and focus. “When I found TM, it just enabled me to relax. Creativity, workload – it seems you’re able to handle more, do more. And it’s not stressful.”

Those who practice TM say the key to unlocking clear thought and function, no matter the situation, is to spend 20 minutes twice a day deliberately thinking about nothing, allowing the brain to essentially have a mind of its own.

“Transcendental meditation is a technique of the mind,” explains Tony Nader, an MIT-educated brain scientist, doctor, author and international leader of the TM movement. “You sit quietly, in a chair. You close the eyes and allow the mind to take its natural tendency, which is to go toward more … we are always searching for more in life. This is the nature of the mind. What we do is turn the mind inward and allow it to dive toward itself. The inner, deeper level of the self is something which is extremely soothing and calming. The source of intelligence, of creativity, of thought, is all within us. So diving back toward ourselves, the mind settles down.”

Transcendental meditation, as a treatment for veterans diagnosed with PTSD, is not a New Age fad. “It has roots in the ancient noble warrior classes, where acting out of fear or anger brought disaster or defeat,” writes TM instructor Bob Roth, author of the New York Times best-selling book “Strength in Stillness: The Power of Transcendental Meditation.”

A three-year DoD-funded study at the VA San Diego Healthcare System indicated that 61 percent of veterans in the program experienced clinically meaningful improvements in PTSD symptoms by using TM. The prestigious Lancet Psychiatry journal published the results in November 2018, a breakthrough in scientific validation for the practice. Researchers compared TM with prolonged exposure therapy and health education treatment, and news of its effectiveness was covered by The New York Times, The Washington Post, NBC News and ABC News.

The clinical trials involved 203 veterans diagnosed with PTSD. One, a Navy veteran whose diagnosis was linked to military sexual trauma, was quoted about the transformation she experienced by participating in the study: “Through TM, I began to heal. I began to come out of my nightmares and face the battle ahead. I began to attend (treatment) sessions faithfully, I began to drive, and I started community college. I got the courage to apply for a job in a hospital. This program has given me my life back.”

Ouellette observed a similar outcome for a skeptical Air Force sergeant “who was always stressed out,” he says. “I told her, ‘You might benefit from this.’ She said, ‘My mind is always racing … I can’t do this.’” She decided, despite her doubts, to give it a chance. “She said she was totally changed. It calmed her down. I got a thank-you note from her, for introducing her to it.”

The Lancet interpreted the San Diego study by stating that transcendental meditation “might be a viable option for decreasing the severity of PTSD symptoms in veterans and represents an efficacious alternative for veterans who prefer not to receive or who do not respond to traditional exposure-based treatments of PTSD.”

A resolution passed at the 98th American Legion National Convention in 2016 called on Congress to fund collaborative DoD-VA research projects into innovative treatment programs for PTSD, particularly those that do not rely on prescription drugs. Further study and accessibility of alternative treatments has also been a consistent recommendation from The American Legion’s TBI-PTSD Committee for nearly a decade. So too has been the committee’s message that no two diagnoses are exactly alike, so treatment should be tailored for each individual’s set of conditions.

For veterans who experienced combat stress for extended periods, Nader explains, “what we are facing is a dramatic transformation in the wiring of the brains of these young service people.”

He says the nervous system “is divided, in a simplistic way, into two parts. There is what we can call the ‘new brain.’ And there is the more animal-instinct-oriented part of the brain, which is more the limbic system inside, deeper in the brain. The old brain, the lower brain, is what protects us from danger; that is most important. The brain is wired so that when you are in a stressful situation, a danger situation, it activates automatically these processes, so you can react quickly. The new brain takes time to analyze and react.”

In essence, the fight-or-flight chemistry of the brain becomes highly stimulated in combat or other stressful situations. “Our brain is wired to defend us from danger without having us to think about it,” Nader says. “You see something jumping at you – a tiger in the forest – you don’t have to think about it. This reaction is either you run away or you fight. Fight or flight. We are deeply wired like that – for the dangers of the jungle.”

For young people who have lived otherwise comfortable lives, the shift to extended life-or-death combat stress triggers changes that can be difficult to reverse. “In a combat situation, they are facing exactly the conditions of the jungle because their life is threatened, and they have to kill the threatening people. There is this very, very deep instinct that is awakened. So the wiring that takes care of this fight-or-flight response gets more and more enhanced. (It) becomes so powerful and so wired that when they come back to normal life, their wiring is different, and everything is now a potential threat. They are living in a constant threat situation – hyper arousal. You cannot just talk to these people and tell them to calm down.”

Transcendental meditation’s roots run 5,000 years deep, to the ancient Vedic tradition in India. The practice climbed in popularity in the 1960s when Nader’s predecessor, Maharishi Mahesh Yogi, led the modern movement and gained a celebrity following, including members of the Beatles, the Beach Boys and the Rolling Stones.

“Some people think it’s hippie,” Ouellette says. “There are also people who have a built-in bias against something new. This isn’t new, as far as the world goes. It’s just different thinking.”

Meditation practices – including mindful awareness, which also has ancient Asian roots – have had a resurgence of interest as a subject for serious scientific inquiry. VA’s recent research, including clinical trials whose results were published in 2018 by the American Psychiatric Association, showed positive results for mindful-based stress reduction after more than 200 veterans with PTSD participated in an eight-week study. While mindfulness focuses on the present (rather than revisiting the past or worrying about the future) and concentration about a particular experience (like eating or exercise), TM is about letting the mind go where it will, the opposite of focus or deliberate thought. Though cautious about meditation practices as an answer for veterans with PTSD, especially those with serious mental health conditions, VA has given it serious study, generally coming away with enough evidence in clinical trials to continue pursuing it.

“As with all complementary and integrative health approaches, mindfulness-based meditation should be a supplement to, not a replacement for, trauma-focused behavioral psychotherapies,” the journal Psychiatric Research & Clinical Practice recommended. “Additional studies are needed.”

“We’ve had 500 or more research studies on the benefits (of TM),” Nader says. “For PTSD specifically, there is more and more rigorous research. It’s a growing body.”

Ouellette says he has seen more studies about TM than mindful awareness, but adds that when a veteran, regardless of a PTSD diagnosis, says he or she is “feeling terrible, is stressed out, is in a bad place … thinking of doing something bad,” TM should not be ruled out because of any stereotypes or cultural biases. Nader says nearly 12 million people worldwide now practice it, and such high-profile advocates as the David Lynch Foundation, as well as the Transcendental Meditation International website itself, have dedicated platforms that describe the benefits specifically for veterans.

Some skepticism is based on a perception that TM is a religious activity or has a specific spiritual or ideological bent. “To the contrary, we have found people becoming more understanding of their religion, more at peace with their god,” Nader says. “We used to say that if religion is to invite God to your home, TM can be like cleaning your home.”

As commander of Vietnam Veterans Memorial American Legion Post 295 in Germantown, Md., Ouellette makes a point to reach out to veterans needing help with PTSD. On the post’s landing page is a platform titled “Resilience: Not All Wounds are Visible,” and VA’s national suicide prevention hotline is promoted, as are phone numbers for counseling. The site also has a variety of videos, testimonials and explanations of TM as a possible therapy solution.

Ouellette has recommended TM for his children, including his youngest son, an Army sergeant who deployed twice to Iraq and twice to Afghanistan. “It worked for him,” he says. “It’s life-changing.”

TM works in part, Nader adds, because it offers for veterans who have endured hyper arousal what any doctor would prescribe after a surgery or illness: rest. “We are teaching them a simple technique that allows them to not do anything, to allow the mind to go back to itself, and then the mind heals itself – the body heals itself. What we are doing is giving it a chance to do that. The experience of transcending, of going deeper, gives that inner experience of peace and quietness.”